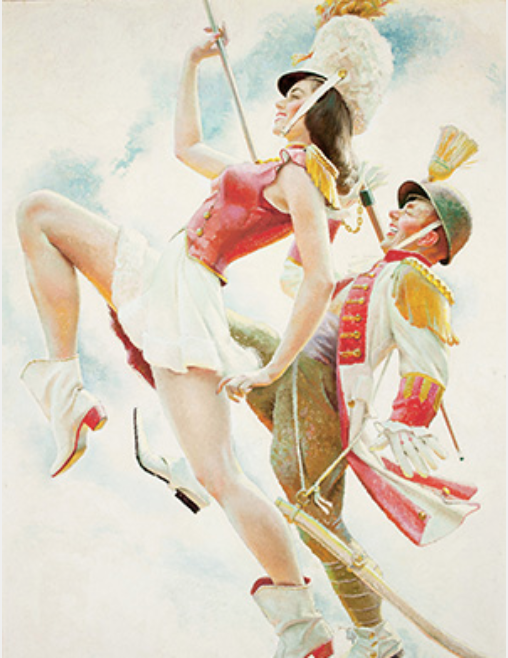 Michael Dolas: Capturing the Character of his Country

When the artist Michael Dolas passed away in 2010 just shy of his 98th birthday, he brought an end to the Golden Age of American Illustration. Its ranks included the likes of J.C. Leyendecker, Norman Rockwell and Dean Cornwell—all of whom influenced Dolas in one way or another during his long career and all of whom he counted among his many friends.

The son of Greek immigrants, Dolas was raised in New York and Pennsylvania. After graduating from Syracuse University with a degree in illustration, he settled in New York City and although he began his professional career by painting covers for a number of national magazines, it was the illustrations for the stories that appeared within the magazines’ covers that comprised the majority of his early work. His paintings accompanied stories by writers such as Pearl S. Buck, Ernest Hemingway and Paul Gallico. Dolas’ characters included average Americans in their everyday pursuits—at work and at play. He also was quite accomplished at capturing the grittier side of humanity in his many illustrations for stories of mystery, crime and adventure.

Before the war, Dolas had utilized photography to help him compose his paintings, and during World War II the US Army took advantage of his photographic expertise. Assigned to the Signal Corps, he spent four years in the Pacific Theatre as a combat photographer, including documenting the landings on Okinawa.

Following the war, Dolas returned to New York to resume his career as an illustrator. By this time the demand for magazine illustrations was waning and so Dolas turned his talents to the growing field of advertising art. Soon his illustrations graced the pages of newspapers, magazines and billboards, all helping to sell a variety of products ranging from beer and dairy products to shaving cream and automobiles. In 1955 Dolas and his family moved to California and settled in Santa Barbara. He worked for a major printing company and continued his work as a commercial illustrator into the early 1980s.

This exhibition features 30 of Dolas’ paintings, from the late 1930s through the mid-1950s. In addition, 10 Saturday Evening Post cover paintings by J. C. Leyendecker purchased by Dolas directly from the artist are also displayed. The museum’s Board of Trustees and Staff wish to thank Michael Dolas’ daughter and son—Lura Dolas and Theodore Michael Dolas—for generously sharing their father’s works and Leyendecker collection with the Haggin and our visitors.