Bonheur established her reputation in the 1840s with her paintings of farm animals, particularly with Ploughing in the Nivernais (Musee national du Chateau de Fontainebleau), commissioned in 1848 by the government of the Second Republic. In 1852 the new government of the Second Empire asked for a pendant to this work, a harvest scene. The resulting Haymaking in Auvergne was awarded a gold medal at the Universal Exposition of 1855 and was favorably reviewed by the prominent critic Theophile Gautier. Harvest Season is apparently a small version executed after this larger work, possibly in 1859. Both the 1855 painting and this version depict the activities of the hay harvest in which men, women, and oxen labor side by side. The sky is nearly cloudless and an intense sunlight causes very dark shadow’s beneath the wagon and team. The artist has taken great care to represent the way the massive bulk of the gleaming, reddish-brown oxen hangs on their frames. The powerful animals are the foremost part of the central diagonal grouping that includes a haycart and four farm workers. Compared to the beasts, the human laborers seem depersonalized, for they are rendered in a cursory manner. To the left and right of the cart are additional harvesters. In the background an empty cart, approaching on the left, and a filled cart, withdrawing on the right, complete the cycle of this seasonal activity.

For the details of her painting, Bonheur, who liked to be faithful to locale probably returned to the studies she had made on her stays in the Auvergne region in the 1840s. She also made numerous compositional sketches. 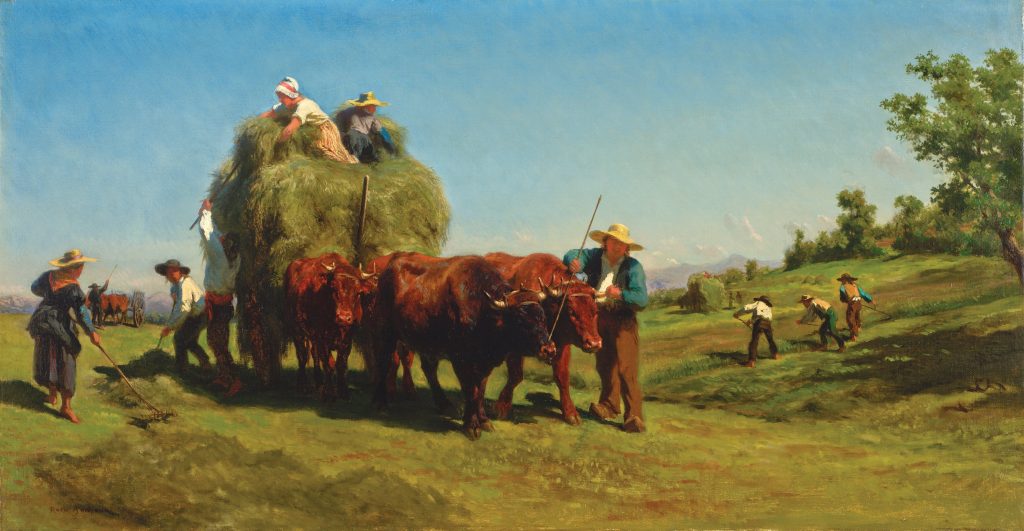