George Inness created visions of man in harmony with nature. Such “civilized” landscapes set Inness apart from his contemporaries in art, such as Thomas Cole, Frederic Church, and Albert Bierstadt, who were famous for their celebrations of the untamed wilderness.

Juniata River conveys the serenity of a summer day. No wind stirs the trees or ruffles the slow-moving river. A cowherd daydreams; a rotting tree stump shelters flowers, implying life evolving from death.

The twenty-six-year-old Inness painted this pastoral scene just two years after his return from Europe, where he had been impressed by the work of the French Barbizon artists. Juniata River is one of the first works to show how he assimilated their lessons. The most evident influence was the color, which is no longer dark and tonal but brighter, less unified, with abrupt changes from brown to blue-green in foliage and sky, and surprising pastels in the stream applied in thick dabs—a change from his earlier, tighter method. 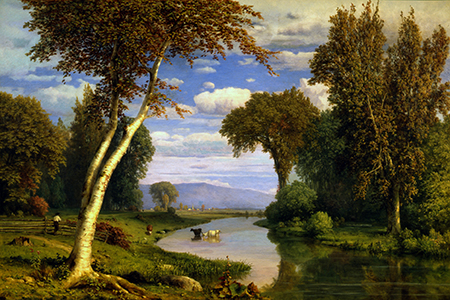