Check, by Jehan-Georges Vibert, depicts an event from the life of Napoleon Bonaparte. Despite his grandfather’s hero-worship of Napoleon, Vibert, the thorough iconoclast, mocks even him. The famous general has just been placed in check – perhaps both literally and figuratively – by his wily uncle, Cardinal Joseph Fesch (1763-1839). Fesch, who owed his high ecclesiastical position as well as his magnificent art collection to his nephew, smugly takes a pinch of snuff. Vibert may have caught a cardinal meddling in politics.

As usual, Vibert is concerned with the accuracy of historical details. He obviously studied portraits of both characters and reproduced their costumes precisely, down to the Legion of Honor medals they wear. He has reproduced Napoleon’s bedroom at the palace of Fontianebleau, including the Emperor’s own self-adulating symbols – the initial “N,” the Bonaparte bees, laurel wreaths, and olive branched. Perhaps Vibert meant to allude to the vanity of power as much as to the meddling of the church in political affairs. 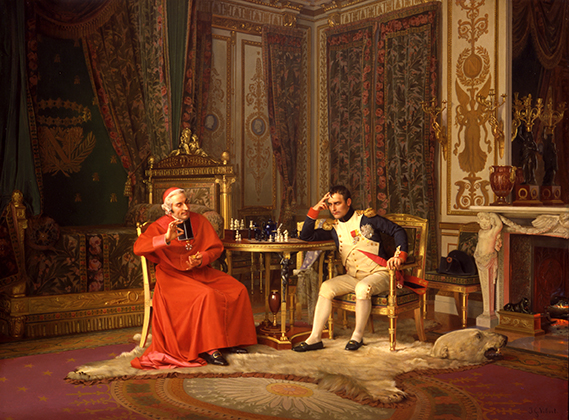