His Eminence Returns is one of Jehan-George’s Vibert’s Spanish subjects lampooning clergymen. He painted many of them in the late 1860s and 1870s. This painting demonstrates Vibert’s knack for theatrical and comic presentation. A cardinal, a favorite target of his wit, is the focal point of the little farce. In this case, Vibert also makes himself the butt of ridicule, since he used his own features and corpulent physique for the cleric.

The dignitary has lost his agility through good living and is perhaps a bit tipsy as well. In any event, dismounting is a major operation, involving the help of an anxious abbe, a servant who stoops to provide footing, an attendant to balance his right foot, and another to steady the mule. Vibert heightens the humor by showing the strain of the bent-over man and the protruding tongue of the animal; both will be happy when relieved of their burden. The two women seem silently amused by the ordeal. 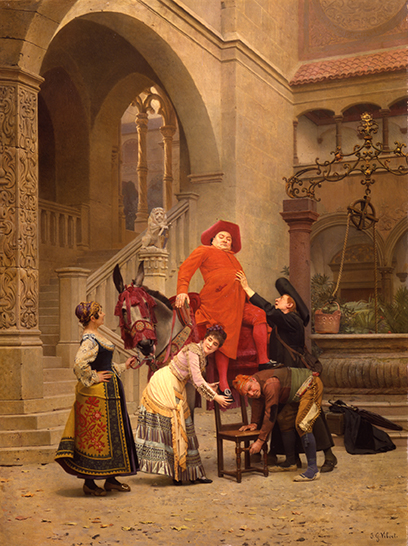